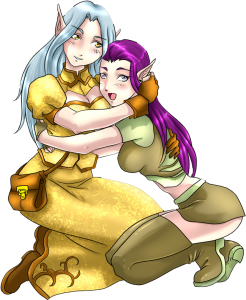 Kalijor is the product of a lot of dreaming, a lot of hard work, and a lot of fun times. I conceived the world of Kalijor after nearly ten years of role playing with my friends through school. I loved the games we played but I quickly grew tired of trying to fit my own ideas inside the framework of the world settings that the source books offered. That and I wanted to have a better reason to tell my friends that they couldn’t play that uber evil-smashing mega knight deluxe character, and setting them in my own world with specifically allowable character types seemed the best way to go and make everyone fall in with a minimum of fuss.

So Kalijor was born. Only not as Kalijor. Initially, and for a number of years I called it Jade. Kalijor was actually the name of a magical weapon found by the players in the world of Jade. Well as I began to flesh out the world and it started taking on a life of its own, I began to think about the possibility of some form of publication and the name Jade is used quite a bit by other folks in the fantasy realm. I wanted, no NEEDED a name for my world that was really unique and sounded cool at the same time. So I upgraded the magical weapon to an entire world (heck of a promotion if I do say so myself).

From that point it just sort of took off on its own. New characters were created, the local governments and politics began to take shape and before I knew it I was pounding away at the keyboard daily (or almost daily) until I eventually found myself here, building this site to support, and promote the novels, the WORLD of Kalijor!